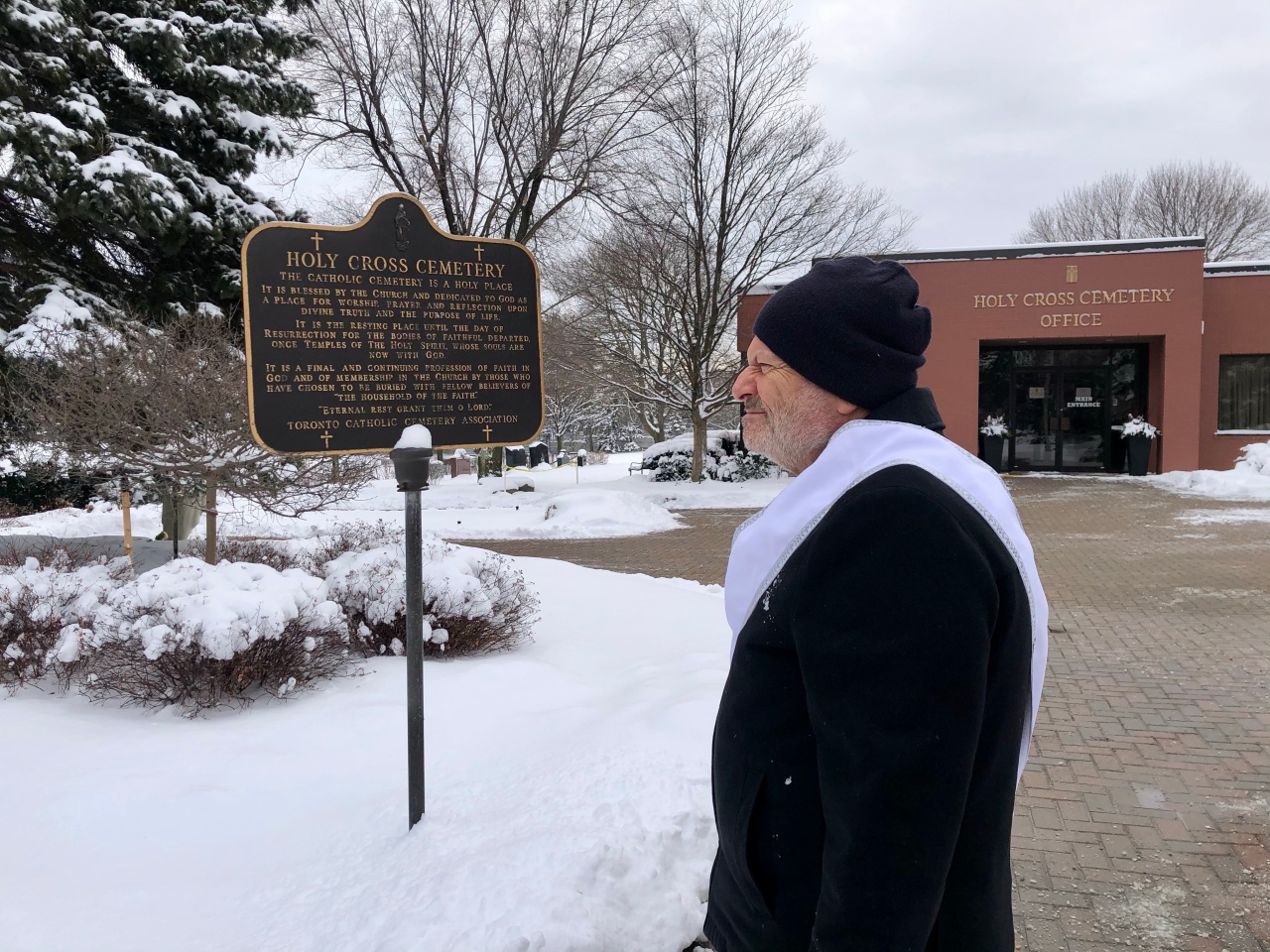 Recently, I visited the Holy Cross Cemetery with Mark Neugebauer. As a deacon for the Archdiocese of Toronto, he has become involved in the service of burying the dead.

While he never expected this to become a key part of his ministry, he was asked one day by a priest to do a committal and he agreed. From there he started doing them occasionally which led him to realize that he really enjoyed it. He asked if he could assist more and was told that a deacon had just died and, in fact, they needed him. Now, he currently does an average of 3 or 4 interments every Monday.

Usually what happens is that Deacon Mark receives an email a day prior indicating the name of the deceased, the funeral company that’s involved, what time the interment is scheduled, and the part of the cemetery grounds (or in which of the cemetery’s five mausolea) it will take place. Later he receives a phone call from one of the service workers saying, “Deacon, it’s time to go.” And then he goes to the appointed place to meet the people.

Looking out together at the snowy grounds, Deacon Mark explained, “The funeral cortège will drive along and they’ll park along the side. I try to arrive at the same time. The first thing I do is put on my deacon’s stole which, for funerals, is either white or purple. In the old days it was black, but now they tell us to wear white. The deacon’s stole, which is worn across, is a symbol of service.”

I asked Deacon Mark what he thinks about when he puts on his stole to which he replied, “I think to myself, ‘I have to get over to those people – quick.’ Because I have to connect with them. Because they are waiting. And sometimes I am running from one interment in the cemetery to the next one. I also bring my book that has the liturgy for Christian burial. When I first get over to the people, I inquire about the deceased. What was the person’s name? Who are their relatives? Where are the mourners? And, who are the chief mourners?”

When I speak with the families, I always always stress that it’s a huge loss. Sometimes people will attempt to comfort mourners by saying of the deceased, ‘They’re in a better place. They’re not suffering anymore. They’re resting. They’re not in pain anymore. It’s better for them.’ And oftentimes people say those things as a kind of a pat answer not to deal with the issue of grief. So one thing that I like to contribute is to acknowledge, ‘We are the ones in pain. We’re suffering. We have the loss. There’s a hole there. There’s somebody missing. They’re not here with us anymore, and so we are now in pain.’ And they all nod because obviously they’re there because they are mourning, and they all know it’s true – even though the deceased is no longer suffering, the mourners still are. So I really want to let them know that I hear that they are suffering and that I recognize their loss. I think this is so critical to grieving.

Deacon Mark has assimilated this deeply, partly due to his own experience after the death of his sister. About this, he reflected, “I was in such agony at the loss of my sister. And so I always say to the people assembled publicly, and to the mourners, that we’re going to pray for the repose of the soul of the loved one but that I also ask everyone gathered to pray for one another, too, and to come around you and give support. I say this publicly to the friends and to the relatives and in this way I try to make it as communal, relational, and personal to both the living and the dead as possible.”

As we began to walk throughout a beautiful and elaborate indoor mausoleum, Deacon Mark explained, “In real, devout Catholic situations, there are the vigil prayers the night before, then there’s the funeral mass, and then there’s the actual burial. Often faithful Catholics will have all three, but a lot of people don’t have these rituals. Sometimes they just have the committal because they’ve paid for the plot.”

I look at their eyes and they’re engaged because I’m connecting where we are with the words of liturgy, and suddenly it concerns them. I find the ones who are not religious at all the most interesting because they really get the notion of death and suffering and grief in a different way than those who are so religious. I suppose it’s because, without religious preconceptions and without the sense of expectations in religion, they are a little bit freer facing up to death and they grieve with naturalness. I hate to say that I want them to cry, but I do really want them to emote.

The physicality of things is a help for this. Deacon Marks explained, “These physical objects and actions – a body, holy water, liturgical action, sprinkling, music, a pall on a coffin, a paschal candle – are very important. It’s a landing pad, so to speak, to connect their emotional grief so that it is not just in the air. These objects and actions become a kind of vehicle for their prayers or emotions to God; they carry and convey their grief.”

Then I asked what he would you say to someone wondering how to accompany a mourner well.

To this, he encouraged, “Let them know that you’re listening, that you care. Words like, ‘I’m really sorry’ and ‘That must be rough,’ ‘That is so hard,’ ‘This is so sad,’ ‘What a loss,’ and ‘I feel for you so deeply.’ It’s important not to tell them what to do and not to try and fix things. Instead, listen to them and affirm their grief because, ultimately, you have to respect what they need. You need to do what’s good for the mourner and respect what they want, not what you want.”

Deacon Mark is passionate about the importance of allowing oneself and others to genuinely undergo the experience of grief but identified some obstacles:

Sometimes people don’t want to show themselves as weak. They don’t want things to fall apart. They don’t want to be a mess. They want to be in control and, above all, they don’t want to be embarrassed in front of people who do not empathize. That is the big deal: the lack of empathy in our world. We have a lack of ability to feel sorry for someone who’s suffering. We watch TV shows where people get blown up and buildings get destroyed and what happens is that this does affect our minds. Then, when somebody dies, we don’t get it. So when people don’t expect others to empathize, then they have to hold it in. But I like when people mourn publicly. I like it when they weep, and kiss the casket, and say goodbye because it shows they are being real with their feelings.

Deacon Mark says doing interments is a special ministry for him – one that he takes very seriously and through which he gets energy. And while he is, of course, always mindful that the deceased is before him, it’s clear that the service he renders is particularly for the sake of the mourners.