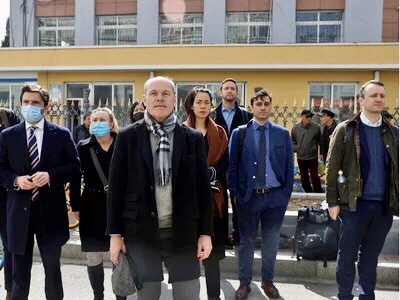 This morning I read Ursula K. Le Guin’s 1973 short story “The Ones Who Walk Away from Omelas.”

The story is about an idyllic town, flourishing with music, processions, decorations, horses, abundant food, flowers, bells, and so on.

The only trouble is that, in order to sustain all of this revelry and satisfaction, one child must be kept trapped in a small broom closet with no light, malnourished, naked, covered in sores, and sitting in its own excrement.

We read that, “this is usually explained to children when they are between eight and twelve, whenever they seem capable of understanding.”

The child’s perpetual suffering is the condition for “all the prosperity and beauty and delight” of Omelas. And so, while everyone is “shocked and sickened at the sight”, most of the citizens resign themselves to the suffering of this single scapegoat that sustains their own comfort and ease.

In an Afterword written by the author in 2016, Le Guin shares a letter from a young reader who, she says, was capable of reading the story in “a painful, profoundly responsible way.”

This reader wrote, “The city of happiness, well, we all live there and people go about their business with the full knowledge of the child in the closet.”

This story makes me reflect on the detention of Canadian citizens by the Chinese Communist Party and on the Uyghurs who are subjected to miserable, dehumanizing conditions in concentration camps.

How often are we “shocked and sickened” about injustice when we first learn of it, only to close the door, look away, and get on with our lives?

When a society’s “city of happiness” is sustained in some twisted and perverse way by the maintenance of others’ suffering, this society is not free. As long as there are Canadians languishing in solitary confinement in Chinese prisons, we are 38 million hostages.

Photo: Charge d’affaires of the Canadian Embassy in China and other foreign diplomats wait outside court in China, Reuters/Carlos Garcia Rawlins