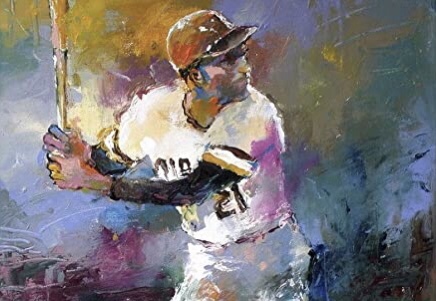 Today while visiting my friends John and Sarah Beth in Houston, John brought home a book to show us titled, Clemente: The Passion and Grace of Baseball’s Last Hero by David Maraniss.

“I don’t find it easy or natural to think about death, but when I think about this book…” John began, excited to share with us the story of a noble life and death.

I had never heard of baseball player Roberto Clemente before but John’s sincere enthusiasm – and even reverence – for Clemente immediately signified to me his undeniable importance.

John told us that his passion for Clemente’s story was piqued in third grade. An excellent teacher had given the assignment of doing a biographical book report on any famous person he wanted to learn about, admired, or found interesting.

John went to the school library and a children’s book about Clemente caught his eye because, “he’s a baseball player and I like baseball.”

John conveyed to us Clemente’s excellence as an athlete and then shared with us the circumstances of his early and heroic death.

“Clemente was at the pinnacle of his baseball career – really wealthy by the standards of Puerto Rico, where he was from, and even by American standards. He was young in his life, but was getting old to be playing baseball at such a high level. Then, there was an earthquake in Nicaragua – not even in his own country. He donated money for relief efforts but then he wanted to go there himself,” John told us.

He continued, “That choice – to say, ‘There was an earthquake, and I can help – not just with supplies but with my presence…’ was not out of character for Clemente. In fact, it was super in-character of him. In a very Aristotelian way, how did he get to do something like that? By continually doing things like that.”

Clemente died in a plane crash en route to Nicaragua on New Year’s Eve in 1972.

“He had actually been going to Nicaragua quite discreetly and it only really became public that he had gone to help because of the plane crash,” John recounted.

Flipping through Maraniss’ book, John read to us that a Puerto Rican writer named Elliott Castro had said, “That night on which Roberto Clemete left us physically, his immortality began.”

A newly inaugurated governor of Puerto Rico said, “Our youth loses an idol and an example.”

A sports writer wrote, “There are things he did on a ball field that made me wish I was Shakespeare.”

He was called a hero because he gave his life in the service of others.

Many were in total disbelief upon hearing of Clemente’s death. At the time, his sons were 7, 6, and 3 and he had only been married for 8 years. Throngs of people went out to the shore, gazing toward the ocean.

“The first time I heard this and now still today, these stories make me ask: Who is like this today?” John said with wonder.

At this point, John pulled up some YouTube videos so that Sarah Beth and I could see some of Clemente’s greatest moments.

Painting a fuller picture of Clemente’s story, John discussed how he was Latino and Black, which meant “a double whammy in terms of treatment.”

John explained that the prejudice of many sports writers seemed to suggest that, while the Black and Latin players might have a lot of athleticism, they don’t speak as well or relate to their team members in the same way. Clemente consistently called out this dehumanization and was effective in doing so because of his talent, sway, and magnetism.

“The fire of dignity burned in his eyes,” we read in Maraniss’ biography.

“And so,” John reflected, “people would have been moved if had gone to help earthquake victims and died on the way, but people are more moved because of the totality of his life. Had he spent the first 15 years of life not doing anything or just being selfish, he would not have the same legacy even if he had died in the same way for same reason.”

I asked John about what lessons Clemente’s life and death have for him today and he said, “Two things: 1) moral boldness and 2) humility.”

Speaking about Clemente’s witness in the present tense John said, “When Clemente sees injustice, his habit is to address it. He doesn’t say, ‘In 5 years I’ll have more cache and take on the press’ or, ‘When I’m retired, then I’ll start helping people.’ He acts with moral urgency.”

About Clemente’s humility, John said, “After he died, it was clear that he had touched so many people in ways that were generous with time, resources, and money – so much so that it was almost mundane or that what was heroic about it was not actually very public. He did not let the fact that the day-to-day is mundane be an obstacle to his acts of service.”

John’s wife Sarah Beth then remarked to him, “You brought Clemente’s story into our marriage.”

And then she turned to me and said, “I didn’t think of baseball as a world of moral stories until I met John. After hearing him speak of Clemente in this way, it clicked: Oh, this was his realm of moral formation.”

John nodded saying, “The invitation and challenge of his life and death is really beautiful and really daunting.”

Nearly 50 years after Clemente’s death, we can see the immortality of his legacy, continuing to inspire people like my friend John to live his life as a man for others.